Nobody on the women’s basketball team is convinced that Illinois State is going to let down after seeing the Panthers beat Missouri Sunday.

Illinois State beat a high profile team of its own. ISU beat Illinois, 69-62, in Champaign on Friday.

That victory is as impressive as any according to Eastern head coach Brady Sallee.

“I watched that film quite a bit and Illinois State is just good,” Sallee said.

Kelsey Wyss, a sophomore guard, said the team isn’t expecting ISU to be intimidated by the Panthers for beating Missouri. She said she expects ISU to play hard on its home court.

Eastern is 1-1 this season. Its only loss came on the road against Western Michigan Friday. Sallee said how the team plays on the road is something the Panthers have to work on.

Traveling to Doug Collins Court at Redbird Arena, Sallee said the Panthers will be playing as good of a team as they will see all season.

Sallee said a combination of playing hard and having talented players is what makes the Redbirds so good.

Two of the Redbirds’ talented players are Emily Hanley and Kenyatta Shelton, who both have size in the paint for ISU, according to Sallee.

Hanley was second on the team in points against Illinois, scoring 14 points and notching eight rebounds Friday.

Shelton, who Sallee said has battled injuries throughout her career, scored 10 points, while picking up five rebounds.

“If you let down for one second (Hanley) is going to make you look bad,” Sallee said.

“We’re going to have to adjust to it and try to slow them down a bit,” Sallee said.

While Sallee said ISU will run on offense when given the chance off of a turnover, he said the Redbirds will be methodical on offense.

“They are very good even early in the year getting the ball exactly where they want it to go,” Sallee said.

The challenge for Eastern, Sallee said, will be to play better than Illinois did against the ISU offense.

However, Wyss said the Panthers are growing more and more confident in each other, especially after the win against Missouri.

“We know we have to go out there and play like we’re playing Missouri,” Wyss said.

While the team doesn’t expect ISU to back down, Wyss said the Panthers will be in attack mode.

“You have to hit first,” Wyss said. 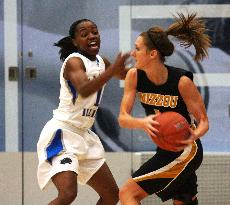