Standing in the way

IOWA CITY – Two Iowa offensive drives and an Eastern punt, and the Hawkeyes led 21-0 as the first quarter came to an end.

After the first 15 minutes, the battle on the visitor’s sideline started.

Eastern coaches and team captains roamed the benches to make sure the Panthers kept their heads up.

Then, after the special teams crippled the Panthers on the previous drive, the bunny was pulled from the hat – Eastern faked a punt.

Sophomore long-snapper Adam Baker snapped the ball diagonally to senior tight end Cody Bruns, who saw an open field in front of him.

Bruns ran 36 yards to keep the Panther offense on the field. Three plays later, the Panthers were in the endzone celebrating.

The lone touchdown wasn’t enough to catch the Hawkeyes, who led 21-7 at that point, as the Panthers fell 37-7 Saturday before a sold out crowd at Kinnick Stadium.

There was no limit to what the Panthers would try against the Hawkeyes Saturday, Spoo said, as Eastern was going to do whatever it took to win.

Following Bruns rush on 4th-and-4, the Panther offense wasted no time getting the ball into the endzone.

Large completed a 37-yard pass to sophomore wide receiver Chris Wright on the next play, giving the Panthers another first down, on Iowa’s seven-yard line.

Two plays later, Large completed a pass to red-shirt sophomore tight end Von Wise in the corner of the endzone.

His longest pass came on the scoring drive, to Wright.

The red-shirt sophomore quarterback was taking his first snaps as a starter for the Panthers, but didn’t throw an interception. He was only sacked twice.

“The game slowed down a lot once I got going,” Large said. “I felt comfortable.”

Part of the reason Large was comfortable was because the offensive line didn’t let the Iowa defensive line have a field day.

The offensive line did not help the rushing game, Spoo said, and senior running back Jimmy Potempa. Potempa rushed the ball 14 times, only gaining 21 yards.

“I don’t think we had a rushing first down,” Spoo said. “We didn’t handle (the defensive line), but our offensive line fought them tough.”

Large fell short of the century mark for passing yards, but that could have been different if some aspects of the Iowa defense would not have been as good.

“Their flats coverage was a lot better than we expected,” Large said.

Large passed to the flats, the area directly to the left or right of the quarterback, often.

Many times, Potempa and sophomore wide receiver Kenny Whittaker were on the receiving end.

Potempa had two catches for four yards, while Whittaker caught four balls for 18 yards. Whittaker was the leading receiver for Eastern.

In the second half, the Panthers started creating turnovers.

On Iowa’s first drive, senior quarterback Ricky Stanzi fumbled a snap inside the red zone, as it looked like the Hawkeyes were going in to score.

Stanzi snapped it, but bobbled it onto the ground. Panther junior linebacker Gordy Kickels jumped on top of the ball.

Bellantoni was jubilant, but Large had to start the offensive drive deep in his own endzone.

“It’s tough to be backed up like we were,” Large said.

On third down, Large threw to the flats again.

But he threw it behind Potempa, and the ball rolled out of the back of the endzone – a safety, Iowa led 30-7.

Eastern got another opportunity from the defense during the next drive.

“It was just a big hit by Nick,” Bellantoni said.

Again, the Panthers could not capitalize. They only gained 17 yards on six plays, before having to punt the ball away.

Iowa scored again in the fourth quarter, to cap off a 37-7 win.

For the most part, the Eastern coaching staff liked the way their team played with heart and intensity.

“We did give them some things with the safety and the blocked punt,” Spoo said.

Standing in the way 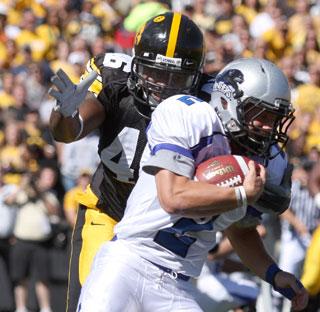