Event breaks down stereotypes in fraternities

Rashawn Ray spoke about the stereotypes among fraternities, based on race, and their different approaches to women during his “Black and White Fraternity Men’s Approaches to Women” presentation Monday night.

Each interview took about two and a half hours. The interviews generally concluded that white fraternities objectify women versus their black counterpart who like to charm their ladies.

Ray wanted to understand why this was the case, which was the object of his presentation.

One theory that he reiterated on why fraternities act they way they do was “size matters.” Ray said minority fraternities are often much smaller than others.

With a small enrollment of only the best candidates, each brother is held to a higher standard, by each other and their community, Ray said. Many of these brothers are the first person to attend college in their family history, which adds extra pressure to succeed.

On the other side, white fraternities heavily recruit new brothers every year to meet the certain amount of capital needed to survive, which requires a lot of new brothers.

Instead of a few men being held accountable for an entire fraternity like in black fraternities, white fraternities sometimes have hundreds of men that take little accountability at all. According to Ray, the absence of accountability leads to frivolous encounters with women, while a black brother will take a more mature approach.

Ray also takes the lack of privacy in bigger, mainly white fraternities into account. In a house with hundreds of guys, in which they sleep two or three to a room, sexual activities become somewhat of a norm for a brother, he said.

Ray also found through his study that white fraternities use their house as a tool to coerce women back to their rooms.

Loose fraternity rules, which is not the case with sororities, could be to blame for the fraternities’ activities, Ray said.

Ray said certain exceptions arose in the study. One 22-year-old senior said he has remained a virgin, and another said he has not partaken in the stereotypical frat boy tomfooleries.

Ray said studies on other minority fraternities parallel those of the black fraternities, while the white fraternity way stands alone.

Ray concluded the presentation saying that both races are guilty of objecting women, but each just take a different approach to achieving the same goal. Certain stipulations, environments and socialization are the factors that determine the way that the two groups act.

Event breaks down stereotypes in fraternities 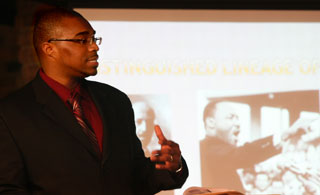